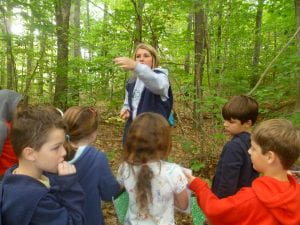 On Monday, September 30th my class went to Camp Lincoln. We went on a mile long nature walk. A counselor named Birch went with us.  She said, ” We are going to make minty tea.” Then Birch asked us to draw the plants that we would be looking for in 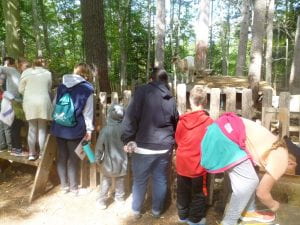 order to help us find them. After we finished drawing, we walked onto a dirt path that was filled with trees in search of the ingredients for the hot tea. After we walked a little bit, Birch stopped us and said, “I found wintergreen to put into the boiling water in the water bottle.” When we had put some fresh wintergreen in Birch said,”We are going to keep walking”. When we started walking again I sniffed the fresh crisp air and I told my friend, Caroline that I was having so much fun. Caroline said, “Yay!” Birch stopped us again and said, “I found fresh Indian Cucumber and pine needles to put in the minty tea. After that we keept walking until Birch stoppted us again.And she said “we are going to a spot to drink are tea and write in are jrnels”.When we got there Brich said “write in your jrnels about the things around you.When we were done we drank are tea. I said “this is so good”.Then Birch said “it is time to walk back.And we did.

One thought on “Camp Lincoln”